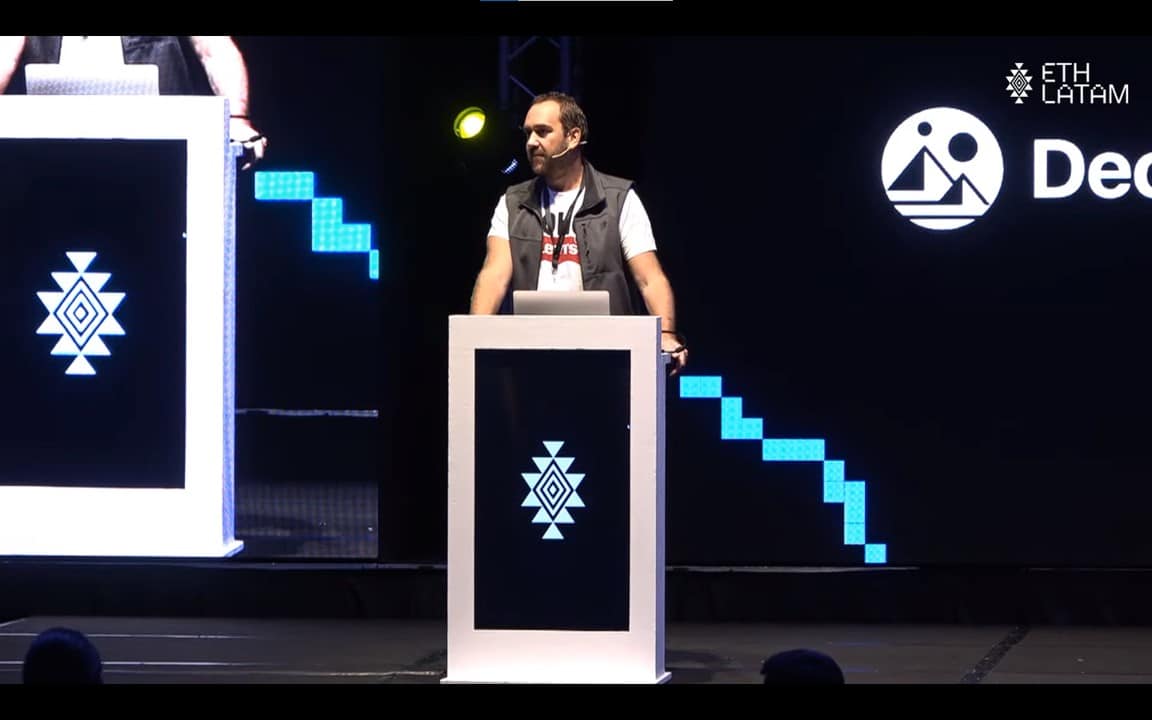 In the framework of the ETH Latam conferences, in Buenos Aires, Argentina, Mariano Conti shared with the attendees his experiences and opinions on decentralization, stablecoins and Ethereum.

Mariano Conti worked for four years as a developer at MakerDAO, where he was especially involved in the creation of oracles. His experience in everything related to Ethereum, stablecoins and decentralization make him a luxury exponent for these topics.

Conti’s presentation began with a statement that many do not know or ignore in the cryptocurrency ecosystem and that can be paraphrased in a few words as follows: if a network or web3 product is not truly decentralized, it is preferable to use Microsoft Excel or any centralized tool that works like an accounting book.

One of the controversial issues related to decentralization is the governance in cryptocurrency networks.

In this regard, Conti used the term plutocracy to define governance in projects such as MakerDAO. This is because those who have more tokens enjoy a greater influence on decision-making. However, the developer believes that the evolution of this technology promises a lot in the future.

Decentralization and the risks of the crypto ecosystem

Another important aspect that Conti sorbe presented decentralization is risk. Something that everyone should consider when entering the world of cryptocurrencies is how much risk are they willing to take?

There are currently cases in development that may alert about some of the risks faced by those involved in projects related to cryptocurrency networks.

One of the most recent examples is that of Tornado Cash and USDC. The US Government’s sanctions on Tornado Cash, after accusing this platform of lending itself to money laundering, gave rise to Circle, the company that issues the USDC stablecoin, will freeze the funds of the addresses related to Tornado Cash.

Conti expressed his concern about the situation with USDC, as he foresees that it may set a precedent that affects the development of tools related to stablecoins. In fact, the developer acknowledged that something similar could happen in MakerDAO. This is because 49% of its reserves are in USDC.

By the way, CriptoNoticias recently reported that the founders of MakerDAO are considering selling all the association’s USDC holdings.

His intention is to avoid a situation similar to that of Tornado Cash. The problem is that a sale of that magnitude could cause DAI, MakerDAO’s stablecoin, to lose its parity with the US dollar. However, the decision which way to go is not for the majority of DAI users, but for the founders.

The founders have the lion’s share of the MKR to vote for. So, although the currency and contracts are decentralized, the voting power was centralized in a few people who can define the future of this currency (DAI).

Bridges between Ethereum and other sidechains were the next point that Conti talked about in his lecture. The amount of money stolen from these bridges so far in 2022 is very high. The attack on the Ronin network bridge, which serves as a platform for the Axie Infinity game tokens, alone extracted more than $600 million in ETH and USDC, of which only a small portion was recovered.

While the centralization of these parallel networks to Ethereum is something that facilitates attacks of this type, regardless of the reason, these are just some of the risks that are taken on the web3.

Regarding the evolution of decentralized finance (DeFi) platforms and applications, Conti expressed his satisfaction by saying that “there is no greater compliment than to see that what we build works better than centralized finance.”

The developer, despite recognizing that many mistakes were made in the early development of many Defis, thinks that these platforms may end up revealing even more interesting uses for cryptocurrencies than a payment method.

Conti took the opportunity to express his opinion on the evolution of Ethereum and was optimistic about the arrival of the new version of this network, without miners and whose issuance and consensus will rest on the proof of participation.