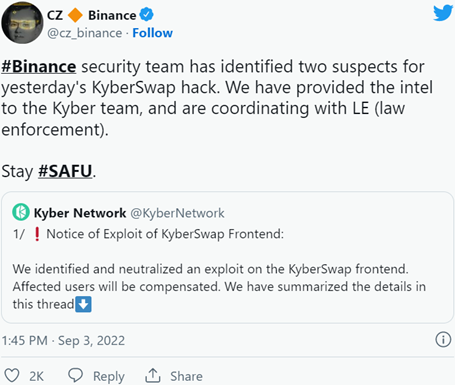 Binance CEO Changpeng Zhao (CZ) declared on Twitter that the security department at Binance, has figured out two suspects who may be the reason behind the theft from decentralized exchange (DEX) protocol KyberSwap recently.

The discovery was made only two days after the security violation was seen by the DEX. As per Kyber Network, a frontal security gap in the exchange on September 1 let the theft happen and a loss of thousands of dollars’ worth of assets. The hackers supposedly released malicious software in the Google Tag Manager (GTM) of the protocol, which led to a bogus authorization allowing them to transact funds to their accounts.

The KyberSwap analysts claimed that the hackers conspiratorially launched the malicious application with the intention to harm whale wallets on Polygon and ETH. Although, the network claimed that the affected clients would get total remuneration. The firm also said that if the funds affected by the theft are regained in some way, then the hackers would face a 15% bug penalty.

Even earlier, Binance had helped other attacked exchanges in finding the hackers or regaining certain stolen money, such as in the KyberSwap case. In the exploitation faced by DeFi, in the previous month, the firm’s portal Curve Finance helped in the recovery of nearly 83% of the stolen funds.

The post Binance Intel finds 2 suspects who can be behind the KyberSwap $265k theft appeared first on Coinfea.