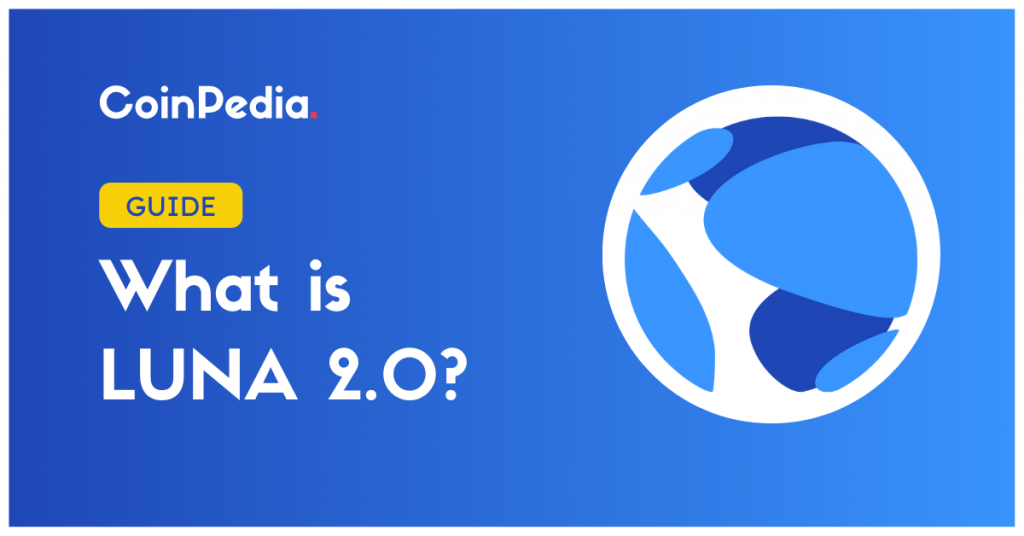 The post What is Terra 2.0? How To Buy LUNA 2.0 Tokens? appeared first on Coinpedia – Fintech & Cryptocurreny News Media| Crypto Guide

As Terra blockchain failed and TerraUSD lost its peg to the dollar nearly three weeks ago, a new iteration referred to as Terra 2.0 or Luna 2.0 is about to be released. A new Luna coin will also be produced as a result. Here’s what you need to know.

Before Moving to what is Terra 2.0? First Let’s get a flashback Of what Really Happened With Terra (LUNA)

The algorithmic stablecoin UST, which is built on top of the Terra protocol and is a driving force behind its entire ecosystem, lost its peg on May 9th.

Because of the way the algorithm works, traders were able to redeem 1 UST (which was trading below $1) for $1 worth of LUNA. This design was meant to destroy the UST and restrict its supply which, in turn, should have boosted its value. However, selling pressure was intense, and UST never got close to its $1 target.

This enabled dealers to print LUNA in large quantities, resulting in a tremendous supply of over 6 trillion LUNA in just a few days. Needless to say, such rapid supply growth in such a short period of time, with no ability to absorb it, resulted in the unavoidable — LUNA’s price plummeted to $0.

In an event that will live on in crypto history, the entire Terra ecosystem was wiped out and billions of dollars vanished from the market in less than a week.

TerraForm Labs CEO Do Kwon has proposed a Terra Luna hard fork to rebuild the ecosystem. Here, the existing Terra blockchain would be split into two blockchains. The current chain and the new chain would exist at the same time but operate differently.

Kwon has officially put forth a governance proposal for community members to vote on his idea to ditch the UST stablecoin and create a new blockchain – Terra 2.0.

In the long run, Terra aims to become a community-owned blockchain. The Airdrop whitelist will be updated to remove Terra FormLab and Luna Foundation Guard (LFG) from the wallet addresses.

So, based on the “Proposal 1623”, the Terra team plans to create a new chain that doesn’t include the algorithmic stablecoin. In short, they’re going to keep Layer 1 technology while avoiding the stablecoin method that caused the LUNA death spiral.

After much uncertainty and debate on whether to go for the hard fork or not, the Terra community has finally voted in favor of the proposal.

Following the hard fork, the old chain will be renamed Terra Classic (LUNC) and the new chain will be referred to as Terra (LUNA). Do Kwon gave an idea of how the blockchain would work, and stated that the new Terra will be created without the algorithmic stablecoin.

On May 28th Finally, the New Terra Blockchain was Live !

Terraform Labs took to Twitter to confirm that Terra had started producing blocks on the newly-named “Phoenix-1” mainnet. It launched at 06:00 UTC, accompanied by a token airdrop for previous LUNA and UST holders.

The new LUNA token will have a circulating supply of 1 billion tokens. Once the hard fork is executed, 30% of the new LUNA tokens will be airdropped to pre and post-collapse LUNA and UST holders in a proportionate manner.

Eligibility criteria for holders to receive new LUNA tokens in the following manner:

LUNA 2.0 was rumored to cost $50 upon launch, with some rumors speculating prices ranging between $30 and $60.

Meanwhile, just hours after the new token’s introduction, its value plummeted by 60%. As per the sources, Terra (LUNA) 2.0 Price started the trade between $17 and $18. Then the price rallied towards the $20 level.

On the Bybit exchange, the price started at $0.5 and skyrocketed up to $30. Shortly after, it started falling and dumped all the way to around $4 before stabilizing at $6. As Per press time, LUNA’s price is trading near $6.09.

Volt Inu (VOLT) Listing on Gate.io While Their Marketing Strategy Continues to Grow