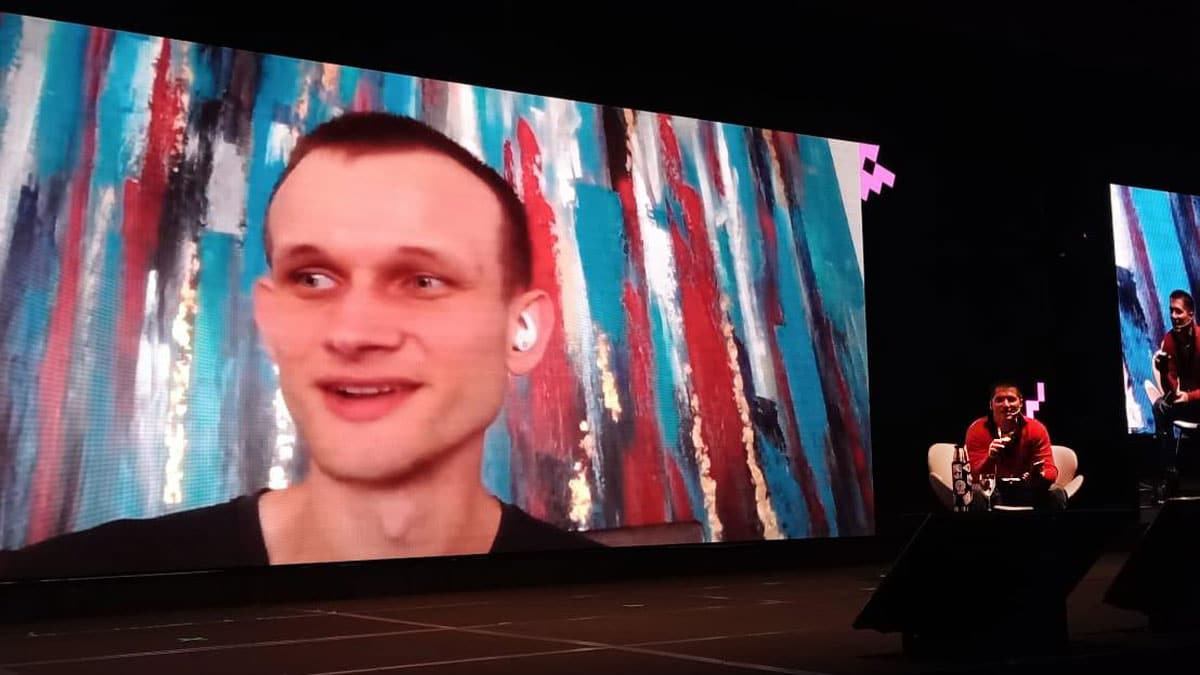 30 minutes before the doors of the main stage of the ETHLatam conference opened, thousands of people were already lining up to get the best seats. It is that today, August 13, the co-creator of Ethereum, Vitalik Buterin opened the day of this party that today reaches its third and last day.

Buterin said “present” so online. Through a giant screen, the Russian-Canadian computer scientist spoke to the Argentines present at the Buenos Aires Convention Center. Evan Van Ness, popularizer of Ethereum technology who was on stage in person, was in charge of doing an interview.

The first question tested the polyglot skills of the Ethereum co-creator, as Van Ness asked him to explain the merger in Spanish (the merge) which will soon take place.

Buterin complied with his request and explained, in the local language, that the merger – which involves the step from proof of work to proof of participation – will serve to make Ethereum much more efficient in energy terms.

“It’s a very difficult process and I need the cooperation of many developers,” Buterin said. His last sentence in Spanish caused laughter from the attendees and also an ovation of applause: “let’s make a hard fork in the chain” [«tenedor duro» es una posible traducción literal de hard fork o «bifurcación fuerte»].

The co-creator of Ethereum, consulted by Van Ness, expressed himself about the recent events that occurred with the cryptocurrency mixer, Tornado Cash. As CriptoNoticias reported, the developer who wrote the code for this application was arrested hours ago.

Buterin was emphatic in showing that, for him, excesses were committed in the way of acting:

It’s definitely a pretty big escalation, on the part of governments, to go after a person for writing code. It is not a corporation or a system that is actively functioning. It’s a smart contract on a blockchain and a couple of javascripts on a server.

The computer scientist, who revolutionized Buenos Aires during the face-to-face visit he made in December 2021, he considers it important to support groups that carry out educational work on cryptocurrencies. It refers, specifically, to those who explain with arguments why it is a good, important industry and that aligns with the values that matter to the community. “They are also values that governments like the United States and others defend,” he says.

Buterin is pleased that he also many bitcoiners maximalists support freedom of expression in connection with the Tornado Cash case: “I think the Bitcoin community and the Ethereum communities deserve a big round of applause, because we know when it’s time to be in solidarity and we’re going to collaborate to get through this.”

“Rollups will be attractive to all Ethereum users”

The dialogue between Buterin and Van Ness focused for a few minutes on the scalability of the network. The Russian-Canadian developer is aware that many prefer to use very centralized blockchains, because they are fast and cheap, instead of using Ethereum rollups.

I think rollups can be inexpensive enough to be attractive to normal users, but we are not at that point yet. I’ve always had that attitude, I mean, I totally understand why people use centralized solutions. You’re not going to want to pay $8 every time you want to do something and that’s understandable. So, it is something that is going to be solved and improved over time.

Anyway, Buterin suggests be careful when using blockchains with a high centralization. Also, with reference to the collapse of the Terra network, which occurred in May of this year, he asks for caution when accessing investments that promise excessively high returns and that are not sustainable over time.

I have compassion for the smaller holders to whom someone said ‘this is great, it’s crypto and it’s going to give you interest’. But I have very negative feelings for the millionaires and the funds who sold these things over the Internet and destroyed everything. (…) You have to make it unfollow [dejar de seguir] to the people who said buy that.

How to solve inflation in Argentina, Vitalik?

The question in this intertitle was asked to Buterin by his interviewer. The computer scientist was sincere and he said he doesn’t have a concrete answer to that problem, so he prefers to leave that to other people.

He recognizes that what is happening to Argentina has already happened or is happening in other parts of the world. He mentions, by way of example, the recent fall in the value of the euro, which reached parity with the dollar weeks ago, as CriptoNoticias reported at the time.

After the series of questions and answers, Van Ness took a selfie with the auditorium full, in order to get it to Buterin. The audience’s applause rang out for several minutes on stage 1 of the Convention Center, and this was the end of this first talk of the third and last day of the ETHLatam 2022 in Argentina.

These Altcoins May Rally, If Crypto Markets Continue to Rise Throughout the Week!