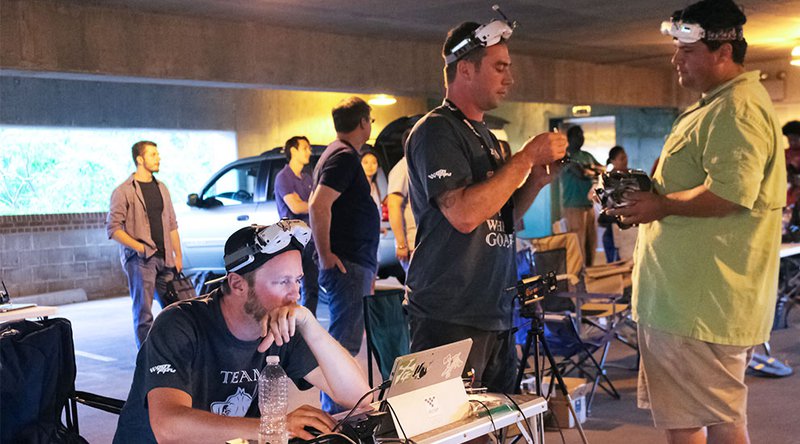 Throughout 2018, blockchain and cryptocurrency hackathons are taking place on every continent but Antartica. In the United States alone, conferences are happening in Las Vegas, Atlanta, Berkeley, Raleigh, San Francisco, New York City, Seattle and, of course, Silicon Valley. Some conferences will be more inclined toward a particular sector like Blockchain Health in Washington D.C. Others will target a specific demographic like Women4Blockchain in New York City. Some conferences will attract thousands in attendance; others might charge thousands of dollars for attendance.

In its first year, EthMemphis distinguished its place on the blockchain conference circuit for displaying an under-the-hood glimpse at what actually moves this young industry forward, specifically on the Ethereum network.

Specifically, the three-day conference consisted of a hackathon interspersed with a Saturday full of blockchain talks, technical workshops, drone racing and a collaborative effort between the Decentraland team of Buenos Aires and the Memphis Game Developers to create a game within the virtual world.

FedEx: Blockchain or Be Disrupted

Sean Healy, senior vice president of transportation for FedEX Freight, gave a keynote address. Healy stated that FedEX Freight is the least technologically sound arm of FedEx and, therefore, presents a huge opportunity for blockchain technology to be applied to supply chain logistics.

Healy explained the importance of FedEx CEO Fred Smith’s quote: “The information about the package is just as important as the package itself.” There are multiple parties involved in the cross-border shipping supply chain such as customs authorities, brokers and government agencies — all of which need information about a particular package. Maintaining a distributed ledger for package information would allow FedEx to significantly reduce operational costs by decreasing turnaround time.

Healy said that with regards the current uncertainty of U.S. regulations applied to blockchain technology, FedEx is encouraging federal and state governance to help set standards.

There were five prize categories at this hackathon: legal, supply chain, healthcare, travel and innovation.

In the legal category, the hackathon was won by “Blockchain of Custody.” Built on Solidity, Blockchain of Custody uses a blockchain to track the criminal evidence used during trials. The project was built by Joshua Shelton, Sam Borick, Christine Lee and Yucheng Zhang.

In the supply chain category, “Organ Trail” won for creating a solution to accommodate fast, secure and error-free transportation of organ transplant data among multiple parties. Built using node.js/Solidity/OpenZepplin/ERC721/Ethereum, the project was built by Alex Fisher, Forest Fang, the ZhenPanda and the mysterious Nedodne.

During the weekend, Bitcoin Magazine spoke with Meka Egwuekwe, executive director of the Memphis nonprofit, Code Crew. Code Crew mentors Memphis’s underrepresented youth to be tech innovators of tomorrow by teaching them how computation and digital systems work, and how to apply those principles to programming and software development.

Since 2015, Code Crew has taught more than one thousand students to code through summer camps, after-school programs and in-school electives. Of the 250 kids who participate in Code Crew weekly, 91 percent are black and Latino and 41 percent are female; 89 percent of all participants are more likely to study computer science.

On Saturday, Code Crew kids wrote their first smart contracts on the Ethereum network with Solidity code using CryptoZombies. CryptoZombies is a free platform that teaches newcomers and experienced programmers alike how to build commercial scale applications, especially games, on the Ethereum blockchain.

Our @_CodeCrew kids have been learning about @blockchain and @ethereum at @ETHMemphis. They’ve even written their first Solidity code using CryptoZombies! #BlockChain #GritGrindCode pic.twitter.com/k1oc07idT5

EthMemphis Does the Infamous ERC721

The ERC721 token was a heavily discussed topic during EthMemphis. On Saturday, Airbnb’s Elena Nadolinski led a live coding workshop where she showed the audience how to build their own ERC721 token. The ERC721’s notoriety in the cryptocurrency and blockchain ecosystem is mostly attributed to the viral phenomenon, CryptoKitties.

One EthMemphis sponsor uses ERC721 tokens to allow for access to hotel rooms for a predetermined amount of time. BookLocal, is a travel and hospitality company that wants to simplify hotel booking and guest management by streamlining it on the Ethereum blockchain.

“Hotels will be able to mint their own ERC721 tokens based on how many rooms they have,” said Sardor Umarov, co-founder of BookLocal. “We see opportunity to empower destinations to work in partnership with local hotel operators, to lower the overall cost of distribution and to retain more revenue within local economies.”

In addition, BookLocal awarded special prizes to hackathon participants Sam Steele and Aaron Anderson for their work on the BookLocal platform.

New Satoshi Challenger Tells All — But Is He Legit?